If you’ve paid much attention to the Linux terminal window, or the Windows console, you might notice that text only comes in a limited set of colors. Why do the colors look the way they do? How IBM chose to represent text color on the original PC set the standard for text color to follow.

A Brief History of Text Color

The original 1981 IBM Personal Computer used a monochrome display, where all text was green on plain black background. Not long after, IBM introduced the Color Graphics Adapter, or CGA, which was the first to support color. In those early days of PC history, memory was limited, so IBM squeezed the most features out of that limited data.

You can display any color by combining different amounts of pure red, green, and blue light. This mix of Red+Green+Blue (or “RGB”) is the basis for all PC colors. Let’s start with the simplest case where you might mix equal amounts of red, green, and blue light. Representing this combination requires either an “on” or an “off” value for each component of “RGB.” And remember that an “on” or “off” is also called a “bit” in computer terminology: 1 or 0.

In that simplest case, you might assume one bit to represent each color: red, green, and blue. If any of the “RGB” bits are 1, then display the red, green, or blue light at full intensity. This gives eight possible colors:

Today, terminal emulators like GNOME Terminal let you change the color palette. Depending on the colors you choose, you might see different colors than those shown here, but you’re still limited to sixteen text colors and eight background colors. 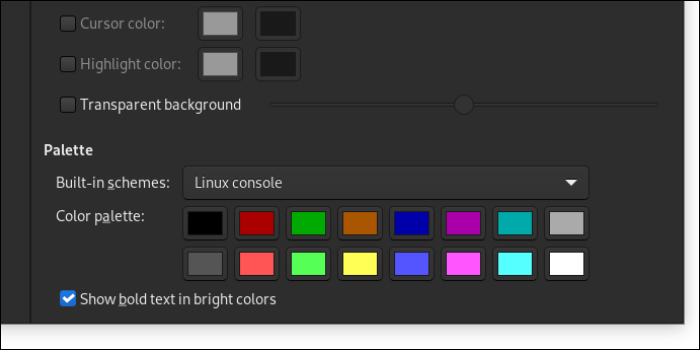