GAIA-X is a European initiative intended to provide a unified ecosystem of cloud services and data centers governed by EU data laws. So why are American cloud companies rushing to sign up?

Data sovereignty is a big issue. It’s the concept that data—especially personally identifiable information (PII)—is governed by the data protection laws and general practices of the country in which it is processed. even inert storage usually counts as processing under data protection legislation.  Things become more complicated when the data is processed in another country.

The usual stance is that the country the data is sent to for processing or storage must have a data protection framework in place that is at least as effective as the framework of the original country. The General Data Protection Regulation (GDPR) took this stance and made it law in the EU.

The biggest cloud players such as IBM, Microsoft, Amazon Web Services (AWS), Alibaba, and Google, have the resources to build data centers carefully positioned around the globe. They are sited strategically to address the issue of data sovereignty. Smaller vendors may only be able to offer a choice of one or two data centers. If they are using one of the major players for their infrastructure they may only have access to a single data center.

Building data centers to satisfy the geographical requirements of your customers might be a sensible business move, but it doesn’t mean all of your data sovereignty issues have been solved. In 2013 the FBI issued a warrant to Microsoft for emails relating to a case they were pursuing.

Microsoft refused, pointing out that Section 2703 of the Stored Communications Act (SCA) could not compel American companies to produce data stored in servers outside the United States. The emails were stored on servers hosted in Microsoft’s data center in Dublin. Extracting the emails and handing them over would have breached the European Data Protection Directive, the forerunner to the GDPR.

Microsoft argued the request for the emails should be made to the Irish Government using the U.S.-Ireland Mutual Legal Assistance Treaty (MLAT), just as if the data were stored on paper in Ireland. Microsoft lost their case, appealed, and won the appeal.

Unlike the SCA, the CLOUD act unambiguously compels a U.S. company to hand over data and information in its “possession, custody, or control, regardless of whether such communication, record, or other information is located within or outside of the United States.” That sits in direct opposition to the principles and requirements of the GDPR and it flies in the face of data sovereignty.

We’ve already seen the start of the backlash against this type of broad data gathering. It was the ability of the U.S. government and its security agencies to be able to ask any U.S. company to hand over data that caused the demise of the EU-U.S. and Swiss-U.S. Privacy Shield Frameworks. A case was brought to the Court of Justice of the European Union that said the privacy of EU citizens couldn’t be upheld if U.S. companies could be compelled to hand over their personal data. The case was upheld and the Privacy Shield agreement was invalidated.

The CLOUD act extends the reach of those data requests to any servers owned by a U.S. company, regardless of where they are in the world. Needless to say, that’s not an attractive option for European organizations bound by the strictures of the GDPR.

RELATED: What Does Schrems 2 Mean For Cloud Computing?

On Oct. 15, 2020, 27 EU member states agreed to work together toward a European cloud federation initiative known as GAIA-X. The initiative is a collaboration between the European Commission, the signed-up member states, and around 100 companies and organizations including Deutsche Telekom AG, Deutsche Bank AG, Siemens, and Bosch.

The objective is to bring the flow and storage of European data under greater European control. Given that dependence on the cloud is only going to increase, this makes sense. GAIA-X understands that the geography of the cloud matters immensely for data sovereignty. A predominantly US-based cloud makes it difficult or even impossible for European individuals and organizations to understand how their data will be safeguarded, managed, and governed.

What started out as a mainly Franco-German project now has a broad European backing and support. It is aiming high. Plans are afoot for a European federated cloud with trusted data flows, storage, and consistent data protection legislation. The realization of the project would require the reuse of existing cloud infrastructure, the adoption of new technologies, and a lot of new interworking.

There will be an “application layer” where users and consumers will interact with services they have subscribed to. The infrastructure layer will consist of interconnected data centers with flexible and dynamic bandwidths. A European cloud has been mooted before. Nothing ever materialized, despite millions of dollars being pumped into projects like CloudWatt. GAIA-X is still in its infancy. Proof of concept ideas are due by the end of 2021. Although the actual design is barely more than a set of ideals, project goals and benefits have been established.

The Big Boys Want In Too

Despite this sounding like something that the current cloud giants would see as a threatening competition, AWS, Microsoft, and Google have all joined the project.

Max Peterson, Vice President of International Public Sector at Amazon Web Services, says their support is driven by “…ensuring the highest levels of security and data protection, respect for data sovereignty, and access to world-leading technology.”

Kasper Klynge, Microsoft’s Vice President European Government Affairs has said Microsoft’s “…commitment to privacy is longstanding and unwavering,” and that “…digital sovereignty and self-determination are critical.”

It’d be easy to be cynical and say these organizations are jumping on the bandwagon because they don’t want the negative press if they’re not seen to enthusiastically uphold the principles behind the initiative, or that they can’t afford to be cut out of any opportunities that may arise. They cannot let a project of this size roll by without their engagement if their competitors have a seat at the table. And of course, Europe is a massive market and they don’t want to alienate Europe.

Google, Microsoft, and Amazon Web Services didn’t get where they are by being charities. Whatever they do—however altruistic—always yields some sort of benefit for them, even if it is just good PR. But at the same time, these organizations are the best at what they do and they don’t like being involved in high-profile failures.

They bring invaluable expertise, experience, and resources to GAIA-X. Let’s hope the many cooks don’t spoil the broth, and that something tangible is actually delivered. 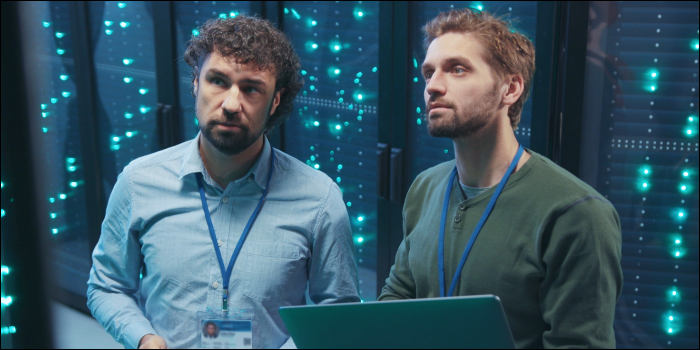