CloudWatch is AWS’s monitoring tool. It collects data about the health and usage of all of your AWS services, and allows you to display them on graphs and in custom dashboards, and set alarms when unusual spikes happen.

CloudWatch is included as part of AWS’s free tier. The free tier only lasts a year, but CloudWatch is part of the “Always Free” tier, so you won’t have to worry about paying for it.

If you want more in-depth monitoring, you can enable detailed monitoring for certain metrics, which update every minute rather than every 5 minutes. You’re allowed 10 of these under the free tier, after which you’ll have to start paying for them.

How to Get Started

Head over to the CloudWatch Management Console, and select “Metrics.” If you’ve been using other AWS services, there should be metrics already available. If not, you may have to wait a day or so for them to appear. If you want to ingest logs, you’ll have to install the CloudWatch logs agent on your EC2 instances.

Metrics are organized by service; for instance, there are separate metrics for EBS and EC2. You can select metrics to display them on the graph. For EC2, the “CPUCreditUsage” metric shows the benefit of burstable instances; a mostly idle instance spikes up when requests are made, and accumulates CPU credits when idle. 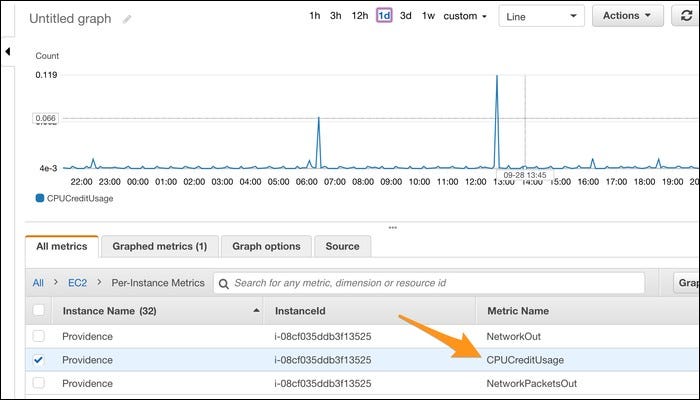 You can graph multiple metrics on the same graph, and hover over them to view more information and isolate the metric from the others:

You can give your graph a name and labels under “Graph Options,” and under the “Source” tab, you can copy the graph as JSON (for use later in dashboards).

CloudWatch can do more than display simple metrics on graphs. If you select “Graphed Metrics,” there’s a button to add a composite metric, which is formed from a math expression:

The metric math is a bit unwieldy to use, but AWS documents it extensively. You can use any arithmetic operator, as well as functions like SUM, MIN, and MAX. One thing to note is that to display the function as a time series on the graph, you’ll need to use the METRICS function.

You get three of these for free, so you may as well use them. Head over to the dashboard tab and create a new dashboard. Next, click the “Add Widget” button, and you’ll be presented with a few options.

Line chart will work best with most metrics, unless you want single-value numbers, which can be useful on a dashboard for certain things like current balances.

You’ll be asked to configure your widget; you can do your configuration in here, or paste in JSON from a preconfigured widget.

Once the widget is added, you can drag it around, resize it, and position it where you would like:

Alarms are one of CloudWatch’s more useful features. They will notify you of any unexpected behavior even while you’re not watching the dashboard. To get started, go to the “Alarms” tab in the sidebar and create a new alarm. You get 10 of these within the free tier.

Select a metric, then you’ll have to define what exactly is unexpected behavior. For example, if you wanted to monitor a T2 instance’s CPU credit usage, you could define “unusual” as getting close to running out of CPU credits.

You can define the line or a band as the threshold, and AWS will perform an action when one datapoint crosses over the threshold. This can be something as simple as sending you a notification using their SNS service, or it can be something more proactive such as scaling up an Auto Scaling group to meet demands, or rebooting a troublesome EC2 instance automatically.