If you want to run your application on AWS’s highly reliable network but don’t want to be bogged down by the complexity of doing so, Lightsail may be for you. It provides an entirely new way to rent servers with simple tiered pricing.

Lightsail Saves You from Console Hell

Every AWS service has its own “Management Console.” Figuring out where everything you need is located is half of the struggle of using AWS. They’re certainly complete—the EC2 Management Console contains everything you possibly need for managing your servers, including tabs for each type of instance, tabs for managing backups and machine images, networking, firewalls, storage, and status reports.

While the interface is very useful for an IT guy, not everyone is an IT guy. If you’re not familiar with it, this interface can feel like you’re staring at an airplane cockpit with no clue what all the buttons do.

Compare this to the Lightsail console, which simply gives you a nice greeting and shows the instances you have running:

Rather than scrolling through a list of instance types looking at costs per hour, Lightsail provides a handful of instances at different tiers. AWS pricing is notoriously complicated, but Lightsail only has one monthly charge for each instance you have running (though even this will be less if you don’t have it running 100% of the time).

Lightsail’s management interface is simplified as well. For each instance, a few tabs exist for managing different aspects, such as networking and firewalls, storage, and viewing usage metrics. As far as actually connecting to your instance goes, Lightsail enables you to access your instance over SSH using a web interface, without having to configure SSH keys or set up your terminal.

Creating a Lightsail instance is pretty simple. From the console, click “Create Instance,” and you are brought to the creation wizard. You can choose from running Linux or Windows; most of the blueprints are on Linux, so we recommend that.

Lightsail provides a handful of “blueprints” with preinstalled software, such as a blueprint with WordPress already configured. This isn’t any different from Amazon Machine Images you may use with EC2, but it’s nice to have on a service like this.

As far as connecting to your instance goes, you’re still given full-shell access. You can connect using the web interface, but you can also add your personal SSH keys here if you have them. If not, Lightsail creates keys for you, which you can download in the future.

Next, select an instance type. You’re given options starting from $3.50 per month all the way up to $160 per month. Each tier is segmented based on compute power, RAM, SSD storage, and bandwidth out. You won’t be charge anything else, unless you go over your bandwidth allowanceand are charged an overage. You likely won’t hit this cap unless you’re serving gigantic media files, in which case you’ll likely need a bigger server anyway.

After that, give your instance a name, hit create, wait about 30 seconds, and you should be able to connect to it.

Perhaps the best feature of Lightsail is the process of connecting to your instance. Rather than having to manage your SSH keys and SSH to the correct IP address using the right username, you simply hit this button:

This pops up a terminal window in your browser automatically connected to the instance: 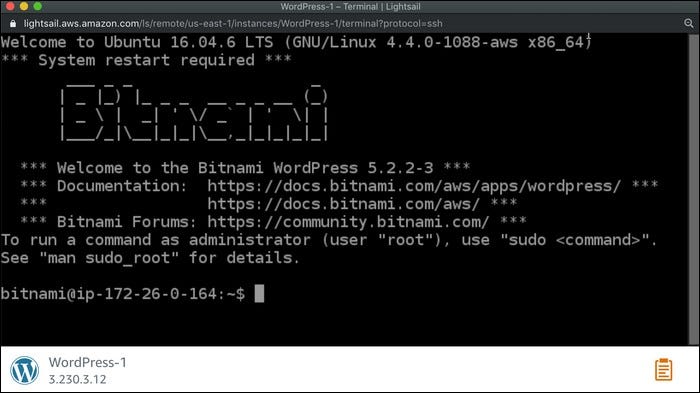 Of course, if you want to use your own terminal, you can simply add your SSH keys (or download the generated ones), and connect to it as normal.

As far as managing your instance goes, the console provides you with a lot of options. If you click on the instance, you’re brought to the info page, which contains tabs for viewing metrics about your instance, changing firewall rules, managing snapshot backups, and configuring additional block storage.

You can stop, reboot, or delete the instance from this panel as well. Even though Lightsail displays prices in monthly increments, it’s simply for your own sanity, and you’re charged on hourly usage. If you’re not using your instance, you can turn the lights off to save a few bucks.

If you’re planning on keeping your instance running for a while, you should assign it a static IP under the “Networking” tab in the Lightsail Console.

In addition to basic compute, Lightsail also offers a managed database service. This service can run MySQL or PostgreSQL, and is split into tiers just like the compute instances are.

You can also purchase additional storage disks to attach to your instances under the “Storage” tab, which can be useful if you’re running out of space but don’t want to upgrade your computer as well.

Additionally, Lightsail provides a few network resources for rent as well. You can rent a static IP for your instance, which prevents the IP address from changing when the instance reboots. It’s entirely free but must be attached to a running instance, or you are charged for them ($5 per month).

You can also rent a load balancer, which balances traffic between two instances. This costs $18 per month, and is intended for users who are reaching the limits of a single instance. At that point, you may want to consider learning and moving to EC2, where it will be easier to manage multi-instance networks, but it’s nice to have in Lightsail.