It’s surprising, but AWS is currently maintaining a fork of CryEngine, ever since they bought the rights to use it from CryTek in 2015. They’ve released it entirely for free as “Lumberyard,” and it features many integrations with Twitch and AWS.

Wait, AWS Has a Game Engine?

This purchase actually makes a lot of sense once you start to examine it. Amazon owns Twitch, the most popular game streaming site, which has numerous integrations with Lumberyard. Multiplayer games often need to run servers, usually very powerful ones with a lot of RAM. Running servers is AWS’s whole business, so buying a game engine from a failing game company with a good reputation, fixing it up for modern use, and releasing it for free is really just one big marketing stunt for EC2.

The only and obvious “catch” is that you aren’t allowed to run your servers on another cloud provider—you must use AWS. You can run your own servers if you’ve got the hardware or are using a colocation service, but you aren’t allowed to run servers on hardware rented from other companies. Really though, if you’re considering using Lumberyard, you’re probably using AWS as well anyway.

If you decide to use Lumberyard, you’ll suffer from AWS’s high server prices (though this can be minimized with GameLift and autoscaling, which we highly recommend), but you don’t have to pay any royalties to the engine. Depending on how you are building your infrastructure, this can be a good or bad thing.

Lumberyard is “open source,” meaning the source code is available for you to customize (crucial for a game engine) and it’s open to community improvement, but you’re still bound to the license and aren’t allowed to sell your modified engine.

Is Lumberyard Any Good?

Lumberyard is mostly just CryEngine. It’s evolved a lot since then, and AWS is committed to actually improving it as an engine, having made consistent improvements over the years.

Even stock CryEngine is still good enough to compete with the two big options—Unity and Unreal. It’s still the engine behind the Crysis series, widely regarded as an innovator in the field of computer graphics. It uses full PBR shaders, and still holds up quite well.

AWS’s improvements include an overhaul of the shader system, a new animation and material system, macOS editor support, as well as many QoL improvements and bugfixes. They’ve deprecated a lot of the legacy CryEngine systems and have added a new component entity system to replace them.

Most notably, they’re working on a visual scripting system, much like UE4’s Blueprints. At the moment, it’s certainly much less polished, but it’s nice to have it as an option.

Lumberyard’s AWS integrations aren’t available here though, only through the AWS C++ SDK integrated into Lumberyard. AWS Cognito makes identity management easy, you can query RDS and DynamoDB databases directly, and you can run Lambda functions all from within the game itself.

Overall, the editor is a bit complicated and a lot to take in at first glance, but it isn’t much more complicated than its contemporaries. CryEngine does have a fair bit of community support, and while Lumberyard and CryEngine have since diverged, a lot of the concepts will carry over due to the shared codebase. 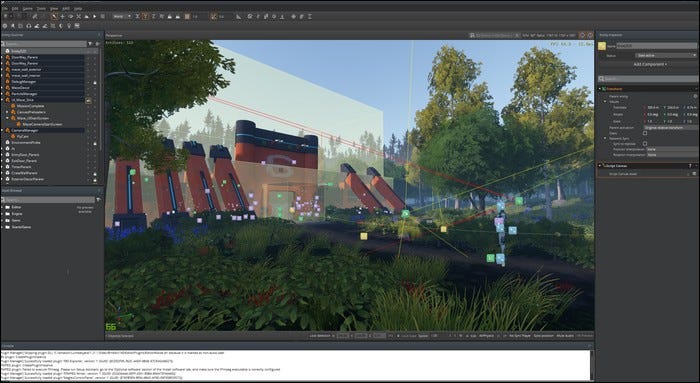 All in all, choosing Lumberyard as your game engine isn’t that unreasonable, but you’ll certainly want to take a look at the other options—Unity, Unreal, and Godot. But, if you really like CryEngine and are planning on building your server infrastructure on AWS, Lumberyard is a decent pick.