CloudFormation is a tool for automating the creation, updating, and management of your entire resource stack. It provides a way to turn your infrastructure into code, in the form of a YAML file, which can be version controlled alongside your software.

CloudFormation’s concept is pretty simple—creating resources manually can be a pain, and while it can be automated using CLI or API requests, if you need to update your stack in the future, it’s still going to be a mostly manual process. Rather than bothering with this, CloudFormation offers a way to model the structure and configuration of all of your resources.

This is done with a YAML or JSON template, which contains all the required info for your product stack, including resources that need to be created, parameters and configuration for those resources, and the outputs they return. This file can be version controlled through Git, and even used to create a continuous deployment pipeline that will automatically push changes

You don’t have to create the YAML template manually though. It’s far easier to use CloudFormation’s web based “Designer,” which will display your whole product stack visually. For example, here is one of the sample templates, for an autoscaling, load balanced WordPress deployment using an RDS instance as the database. 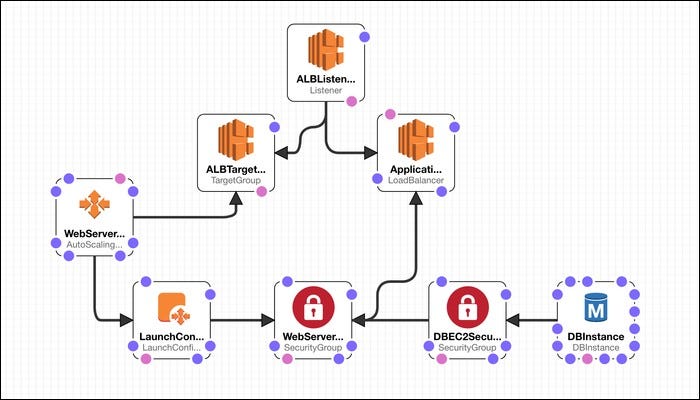 You can drag new components out from the provided catalogue and link components together. Updates to the visual template will update the underlying YAML template. If you click any resource in this template, it will automatically scroll to the entry in the YAML resource list. Very handy.

Head over to the CloudFormation Console, click “Create Stack,” and select “With new resources.”

This will open up a dialog where you’ll select your CloudFormation template. You can import an existing template from S3, but if you’re just getting started, we suggest trying out one of the sample templates. We’ll select the simple “LAMP Stack” template, which deploys a single web server. Click “View In Designer” to open the template up.

This template is pretty basic. Just an EC2 Instance, and a security group for that instance. 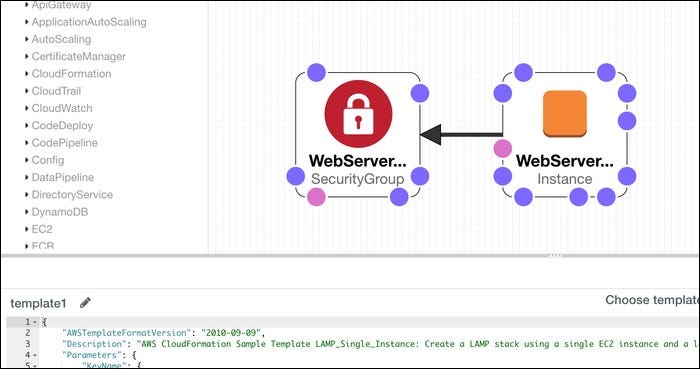 If you wanted to add something new to the template, the easiest way is by finding the resource in the sidebar and dragging it in. For example, if you wanted to add an Elastic IP to associate with this new instance, look in the “EC2” section to find “EIP,” and drag this in: 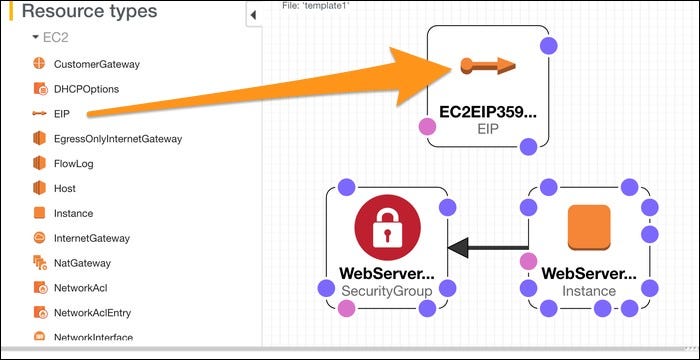 By default, it’s not connected to anything. You’ll need to attach it to the EC2 instance to have any effect. The purple colored dots are properties. You can drag from these properties to form links to other resources. To link the Elastic IP, drag the top corner “EIPAssociation” to the instance. Compatible resources will be highlighted in green when dragging. 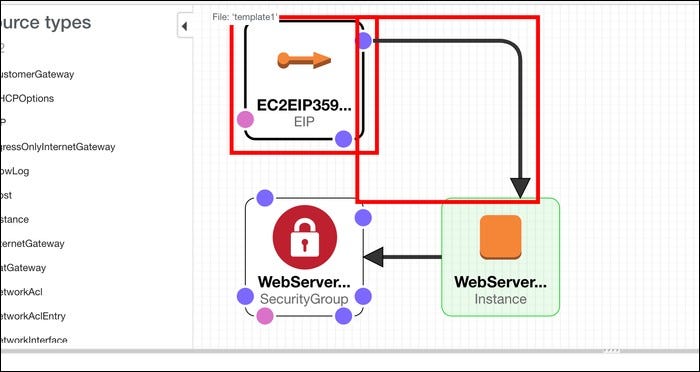 If you click on a resource, you’ll be brought to the entry in the YAML template. Changes to this template will propagate to the designer, though you may have to hit the refresh button in the top right corner.

Overall, the YAML template will have a few distinct sections:

Metadata, mostly used by the CloudFormation Designer to keep track of where things are visually, but can also be used for general metadata.

Parameters, arguments that are passed to the CloudFormation console and can be passed into the template at runtime. For example, the default template includes a few parameters for specifying the MySQL database name, username, and password, such as:

Mappings, these are a little complicated, but they’re basically like case statements. You can use them to change parameter values depending on a key. For example, AWS uses this to change the AMI ID based on the region the template is being deployed into. You can use the Fn::FindInMap intrinsic function to look up these values elsewhere in the template. You may want to read more on this from the AWS docs.

Conditions, which allow CloudFormation to only deploy resources if conditions are met. For example, you can use this to deploy specific resources in production, testing, and staging environments, but not in development ones.

Transforms, which allow for custom processing on your template before it is deployed. This is a bit of a niche feature, but it’s used by SAM for deploying Lambda functions. You’ll have to set this up manually, and then call it by name:

Outputs, which allow you to link resources between stacks, or simply return a response. You can think of these like public versus private variables.

And finally, Resources, which is simply an array of all of the resources in the template. This will vary wildly depending on what you’re using, as each service will have their own properties. For example, an EC2 instance with a custom AMI may look something like this:

You can consult AWS’s full schema reference for more information on the particular service you’re using, or the resource and property reference.