What Affects the Score?

The total base score is ranked 0 to 10, and is composed of three subscores—exploitability, impact, and scope. A lower exploitability score is worse, as is a higher impact score. An exploit that can be easily exploited over the network by anyone and has a high impact would be critical, and an exploit that requires physical access or user interaction and doesn’t do much would be very low impact.

Exploitability refers to how easily a vulnerability can be exploited by an attacker. The fewer things that are required from the attacker, the easier it is to exploit. There are four components to this: 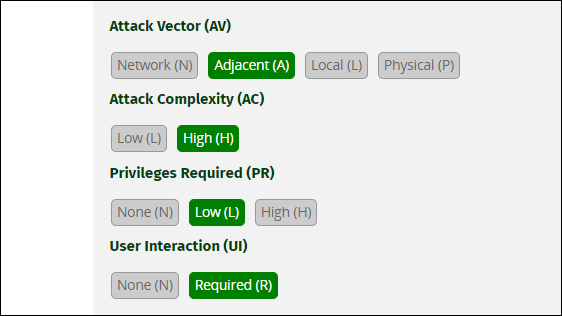 Impact refers to how severe the exploit is, and how much it affects the target system. This has three components: 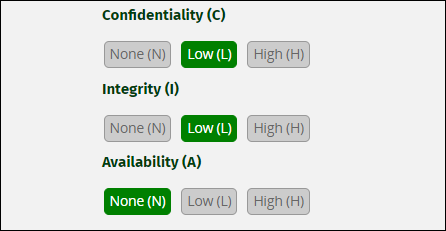 Lastly, Scope. This one is a bit more complicated, but it basically refers to whether or not the exploit gives access to resources outside of the control of the target, usually outside of a security sandbox or barrier. The CVSS guide defines it as “when a security boundary mechanism separating components is circumvented due to a vulnerability and this causes a security impact outside of the security scope of the vulnerable component.”

Examples of this include a vulnerability in a virtual machine allowing writes on the host, vulnerabilities in microprocessors giving access to other threads, cross-site scripting or URL redirection attacks that can give access to a users browser, and sandbox escape).

Ultimately, this all comes down to a single score, and a description like “High” or “Critical” describing the overall severity.

Alongside the score, you’ll often see the vector string, which looks confusing at first but is really just abbreviated key-value pairs for each component.

You can actually take any vector string, and load it into the calculator after the hashtag to get a better view of it:

The other main score is the Temporal Score, which tracks how an exploit’s severity changes over time. This includes code maturity (if the exploit is being used in practice), whether or not there are any kind of fixes, and how confident the publisher is about the details of the exploit.