The spreadsheet you are probably most familiar with is Microsoft Excel. But have you ever wondered why Excel looks and acts the way that it does? Why does Excel arrange data in a grid of cells? Why are columns identified by letters, and rows by numbers? The answer, like most things in IT, is because of compatibility.

The first “computer spreadsheet” as we recognize it was VisiCalc, by Dan Bricklin and Bob Frankston in 1979. Originally released for the Apple II personal computer, VisiCalc also made its way to DOS and the IBM Personal Computer in 1981. You can track most of Excel’s design decisions back to VisiCalc.

Before the computer spreadsheet, accountants tabulated numbers on paper worksheets. Each worksheet had dividers for columns, and lines to define rows. VisiCalc also displayed values in columns and rows, labeling each column with a letter from A to BK (63 columns) and each row with a number from 1 to 254 . VisiCalc identified an individual cell with a combination of the column letter and the row number, so A1 was the cell at the first column and first row, while D12 was the cell in the fourth column and twelfth row.

With VisiCalc, you entered a grid of numbers, such as travel expenses or a department budget, and performed operations on them. You could add up a range of numbers using the SUM function, or find the minimum value using the MIN function.

Pretty much the same way you’d use spreadsheets today, with a few minor differences. For example, VisiCalc used the ellipses notation from mathematics, representing a range as A1...A10. Also different from modern spreadsheets, VisiCalc used the @ symbol to indicate functions, such as @SUM(A1...A10) to calculate a sum across a range.

One reason Lotus 1-2-3 was able to overtake the competition is because it didn’t require users to re-learn the spreadsheet. Like VisiCalc, Lotus 1-2-3 labeled columns with letters, rows with numbers, and cells with the A1 syntax. Even the functions from Lotus 1-2-3 were the same as those in VisiCalc, including the @ to start a function reference.

Lotus 1-2-3 also streamlined a few things, making the spreadsheet easier to use. One notable example is how to specify a range. Instead of the “three dots” ellipses in VisiCalc, Lotus 1-2-3 used only two dots. Thus to calculate a sum across the cells A1 to A10 , you entered  @SUM(A1..A10).

And Lotus 1-2-3 added new features, such as the ability to chart data. And as the computer spreadsheet that was “All of VisiCalc, and more,” Lotus 1-2-3 overtook VisiCalc in the market.

It wasn’t until Microsoft developed applications for Apple’s Macintosh graphical user interface that the spreadsheet landscape changed. In 1985, Microsoft first released Office for the Macintosh, including a version of Excel. Later, Microsoft also released its Office products on Windows. And as the only spreadsheet for Windows, Excel became the new standard.

Microsoft was careful to provide backwards compatibility with Lotus 1-2-3. Excel used the same basic interface as Lotus 1-2-3, with “columns as letters” and “rows as numbers,” and the A1 cell reference model. Lotus 1-2-3 compatibility was so important that Excel even implemented a “year 1900” Leap Year bug from Lotus 1-2-3.

Despite its compatibility with Lotus 1-2-3, Excel did streamline some things. Range references were made easier, using a colon instead of the two dots. Some functions were renamed to make them easier to remember, such as AVERAGE instead of Lotus 1-2-3’s AVG to calculate the mean of a list of numbers. Cell calculations changed, too, now starting each calculation with = instead of the @ notation from Lotus 1-2-3 and VisiCalc.

So the next time you wonder why Excel does things in a particular, think about Excel as a product of spreadsheet history. Excel looks and acts the way it does because that’s how Lotus 1-2-3 did things. And Lotus 1-2-3 looked and acted that way because that’s how VisiCalc operated. So really, Excel traces its design and even its interface back to VisiCalc from 1979. 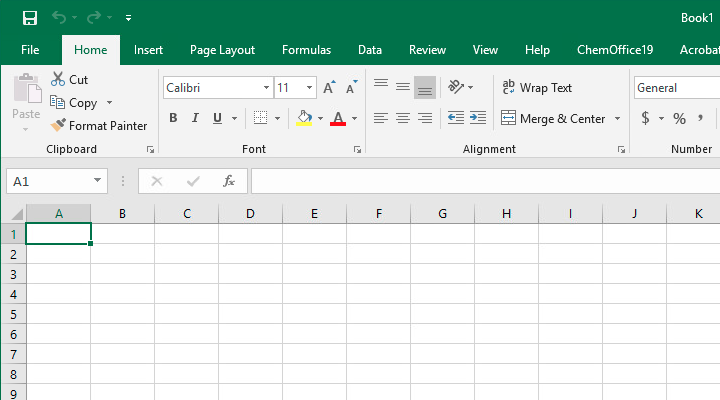